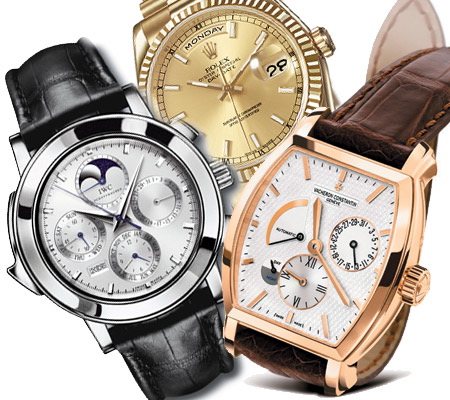 An analog watch is simply a watch that has “hands”.  Analog watches may have a second hand which moves in a continuous motion or no second hand at all.  On some style watches when the second hand moves at two second intervals it is a signal that the battery is low and needs to be replaced.

An “LED” watch uses a light emitting diode to display the time.  This style watch usually has a button that you press to see the time and the numbers are bright red.

A quartz watch is the most common watch in the marketplace today, it runs on a battery.  A tiny quartz crystal in the watch vibrates at a very stable frequency which keeps the time instead of the traditional mechanical movement.

A mechanical watch operates using a series of gears.  A spring in the watch is wound to power the gears.  A jeweled watch uses gems such as rubies at points of friction inside the “movement.”  A watch containing 17 jewels is considered a fine watch.

An automatic watch is a self winding watch.  The watch is designed so the motion of your wrist continually winds the watch when you wear it.

A moon watch has a second dial that rotates behind the regular dial which has an opening in it.  The rotating dial that changes as the dial rotates showing the various phases of the moon or the sun during the day and the moon at night.

A watch that conforms to strict standards of accuracy set by an official institute in Switzerland. Not to be confused with chronograph.

A divers watch is water resistant to a depth of fifty or one hundred meters or more and is marked on the dial.  The bezel of a diving watch is designed to rotate in one direction, this function allows the diver to determine the amount of dive time or remaining air time.  Instead of the regular push-pull type of crown, diving watches often have a screw down crown to create a more effective water seal.  The band on a diving watch is usually made of rubber or a similar material so the salt water does not deteriorate it.  The numbers or hour marks are usually larger and often glow in the dark to improve readability under water on watches designed for diving.

A day/date watch has a little window on the dial which shows the day and date.  Some watches may only show the date and others, such as Seiko watches, will show the day in English and Spanish

In addition to wrist watches, there are other common styles such as pendant, brooch and ring watches.  It is interesting to note that pendant watches are sometimes designed so they hang in what appears to be an upside down position, but all you have to do is look down to see what time it is when you are wearing one.  There are watches on the market today that will actually monitor your pulse, these are useful for people who exercise and keep track of their pulse rates while jogging, etc…  A nurse’s watch is usually made of stainless steel, is water resistant and has a red sweep second hand to make it easier to read when taking pulse rates.  There are many other specialty watches on the market.  Some are made for pilots, race car drivers, etc… and others have additional functions such as calculators, telephone directories, etc…

A pocket watch is usually attached to a watch chain of approximately thirteen inches by a clip known as a “Watch Fob”.  The watch chain is clipped to a vest or belt on one end and the watch goes in the pocket.

A timepiece with dial, hands and numbers or markers indicating the 12 hour time span. The standard watch design.

A watch which is designed to resist magnetic fields such as those caused by electric motors.

Ladies style watch with a thin, elongated face; usually rectangular in shape but may be oval.

The ring around the dial of a watch that can hold the crystal in place. In some watches (e.g., diver’s watches) this can be rotated to show elapsed time as other functions.

A rounded semi-precious stone or synthetic material usually black, fitted into the watch crown as an ornament.

A watch feature that shows the date and sometimes the day of the week and the month. It can be displayed through a cut-out window in the dial, as a sub-dial with small hands indicating the day/ date feature or by digital readout.

The size and factory number of a particular watch movement. The number denoting the calibre is displayed on the case back of a Pulsar watch and is the first four digits before the hyphen in an eight-digit number.

This is the protective covering surrounding a watch movement. Primarily it is made from base metal, stainless steel, gold, etc. and includes a bezel, back and crystal. The quality of the material dictates the appearance and the value of the watch.

Another name for stopwatch. This feature allows one to record the time of an event starting from zero, and to stop and start or go back to zero at the push of a button.

The button on the side of a watch, usually at the 3 o’clock position, used to set the functions of the watch, i.e., hands, calendar, etc.

The mineral or synthetic (glass-like) covering over the watch dial.

The plate set behind the hands and over the movement of a watch designed with numbers or markers indicating the time divisions.

Any watch that shows the time in numbers instead of by hands on a dial. The numbers appear in LCD (liquid crystal display) which shows a continuous reading or in LED (light-emitting diode) which shows time at the push of a button.

Diver’s watches are designed and manufactured especially for divers whose lives depend on the reliability of their watch in the water.

Process of covering metal articles with a film of other metals. The article is immersed in a chemical solution; electric current (D.C.) flows through the solution from a piece of metal (anode) to the article (cathode), depositing metal thereon by electrolysis. Metals which can be used for plating are: 1) gold-a precious metal generally yellow in color; 2) chrome-can be white or black; 3) palladium-a precious metal, generally white; 4) ruthenium-also a precious metal but usually gray.

The pointing device anchored at the center and circling around the dial indicating the hours, minutes, seconds and any other special features of the watch.

Baton Hands: A narrow hand sometimes referred to as a stick hand.

Dauphine Hands: A wide, tapered hand with a facet at the center running the length of the hand.

Luminous Hands: Hands made of skeleton form with the opening filled by a luminous material.

Self illuminating paint used on hands and markers.

A wheel on a watch partially showing through a cut-out window indicating the lunar phases.

A bezel ring which can turn either one way (counter clockwise) or both ways and generally clicks into position.

A crown which aids water resistance by sealing the crown against the case. The seal is achieved by the matching of a threaded pipe on the case with the crown’s internal threads and gasketing while twisting the crown to lock it into place.

An automatic watch that winds itself from the motion that occurs when it is worn on the wrist.

For a watch to be called shock resistant it must be able to be dropped 39 inches onto a hard wood floor without any significant effect on the operation of the watch.

Light is converted into energy by a solar panel. This energy can be stored for up to six months in a rechargeable battery.

A watch band made of leather, plastic or fabric.

A wheel on a watch partially shown through a cut-out window indicating a sun and moon on a 24-hour basis.

Titanium is a space age metal that is twice as strong and half as light as stainless steel. It is also non-allergenic, extremely resistant to salt water and other forms of corrosion, and able to withstand extreme temperatures.

A water resistant watch will withstand water pressure up to a depth of 100 feet. This is the equivalent of three atmospheres.  The use of the term “Water Proof” is expressly forbidden under the F.T.C. guidelines. A term that may be used if a watch is sufficiently impervious to water or moisture so that at the point of purchase, that watch could successfully withstand tests as specified by the Federal Trade Commission.